Why is MR Performed?

Magnetic Resonance (MR) Imaging (also known as MRI) was initially researched in the early 1970's and the first MR prototypes were tested on clinical patients in 1980. MR imaging was cleared for commercial availability by the Food and Drug Administration (FDA) in 1984 and its use throughout the world has spread rapidly since. There are now more than 10,000 MRI systems in use worldwide.

MR is one of the best diagnostic exams for imaging many types of soft-tissue including: 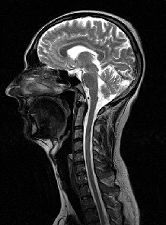 Sagittal MR image of a head and cervical spine

This is because MR can provide exquisite contrast detail between different tissue with vary similar densities, for instance gray and white brain matter.

MR imaging and MR angiography are finding a greater role in the detection, diagnosis and treatment of heart disease, heart attack, acute stroke and vascular disease which can lead to stroke. Additionally, MR imaging is a vital part of diagnosing and treating sports injuries, and MR is finding an increasing role in diagnostic mammography. MR is a powerful tool for finding and diagnosing many forms of cancer.