How does x-ray imaging work?

X-rays are also referred to as radiographs or roentgenograms (after W.C. Roentgen). Conventional x-ray imaging has evolved over the past 100 years, but the basic principal is still the same as in 1895. An x-ray source is turned on and x-rays are radiated through the body part of interest and onto a film cassette positioned under or behind the body part. A special phosphor coating inside the cassette glows and exposes the film. The resulting film is then developed much like a regular photograph. It is the special energy and wavelength of the x-rays which allow them to pass through the body part and create the image of the internal structures like bones of the hand. As the x-rays pass through the hand, for instance, they are attenuated (weakened) by the different density tissues they encounter. Bone is very dense and absorbs or attenuates a great deal of the x-rays. The soft tissue around the bones is much less dense and attenuates or absorbs far less x-ray energy. It is these differences in absorption and the corresponding varying exposure level of the film that creates the images which can clearly show broken bones, clogged blood vessels, cancerous tissues and other abnormalities.

A "fluoroscopic x-ray system" from 1907, the doctor watches the fluorescent screen to see moving x-ray images of the patient's chest and abdomen.

The principals of fluoroscopy are much the same as with film x-ray (called radiography) described above. However, fluoroscopic imaging yields a moving x-ray picture or movie. The original "fluoroscopes" consisted of an x-ray system and a fluorescent screen which registered the x-rays and emitted glowing light. The doctor could watch the fluorescent screen and see a dynamic (moving) image of the patient's body (for example the beating heart). Fluoroscopic technology improved greatly with the addition of television cameras and fluoroscopic "image intensifiers". 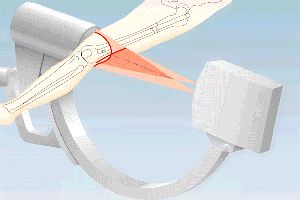 This graphic represents the path of the x-ray beam from the x-ray tube to the image intensifier, for instance during orthopedic surgery of broken leg bones.

Today, many conventional x-ray systems have the ability to switch back and forth between the radiographic and fluoroscopic modes. The latest x-ray systems have the ability to acquire the radiograph or fluoroscopic movie using digital (computerized) acquisition. This gives the radiologist additional control over image quality and interpretation and can allow lower doses of radiation. Digital imaging allows the final image to be networked to various locations for additional consultation or interpretation.