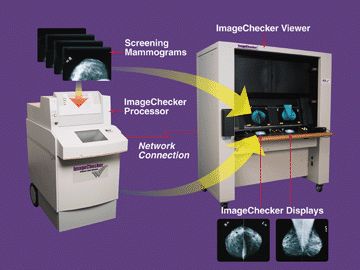 Recently, Congress passed the "Medicare, Medicaid, and SCHIP Benefits Improvement and Protection Act of 2000" that will provide additional reimbursement for screening mammograms using the CAD technology. According to California Representative Anna Eschoo, this legislation will give women greater access to more accurate mammograms.

How Does the CAD Technology Work?

In essence, the CAD technology works like a "spell-checker." The computer marks abnormalities on the digitized films similar to the way a computer program might alert a writer to a misspelled word. After reviewing the computer’s marking, the radiologist can decide whether the marked area is indeed an abnormality that needs follow-up or if the computer has alerted him or her to a normal area, such as a blood vessel, that is no cause for concern. The final interpretation is still made by the radiologist.

The CAD technology marks breast abnormalities on digitized mammography films using a special coding system. For example, the R2 Imagechecker marks clusters of calcifications with a small triangle and breast masses with an asterisk. (See the mammogram image below). CAD marks are only made on the digitized mammograms; the original films are not altered.